The NBA Draft often plays host to the stories of surprising professional athletes, but Thursday’s 2012 version saw the capping of a particularly unlikely narrative. 27-year-old Bernard James was selected by the Cleveland Cavaliers (on behalf of the Dallas Mavericks, who had negotiated the pick in a deal with Cleveland) with the 33rd pick of the draft, having just spent four years with the Florida State Seminoles. James’ age would make him special enough — he’s the oldest player to get picked in the last 20 years.

But the real story behind James is his previous job: he served six years in the Air Force, starting at age 17. His stint included three tours of duty in Iraq, Afghanistan, and Qatar, serving as military law enforcement. Even though he only started playing at 14 or 15, he says, FSU coach Leonard Hamilton spotted him at an Armed Forces tournament in Las Vegas and gave him a scholarship. Of his past life, James told USA Today:

“I think there’s a huge difference between me and other players, right down to my mindset and how I approach things every day. A lot of these kids haven’t seen a whole lot in their lives. For many of them, all they know is basketball. They’ve been playing since they were about eight years old and they don’t realize what it’s like in the real world, having a real job and working for $30,000 or $40,000 a year. I’ve definitely learned not to let a single day go to waste.”

When James was selected, the Draft crowd erupted in a “U.S.A., U.S.A.” chant:

I watched James play for Florida State as a senior last year. Although he’s far from a flashy, game-changing player — you wouldn’t really expect that type of guy going in the second round anyway — James has size, athleticism, and energy that should make him effective in the NBA as a rebounding/defensive specialist and occasional shot-blocker. Because he was a second-rounder, James now needs to earn his contract, so the road isn’t quite over yet.

1. The first recreational pot industry in the U.S. opened in Colorado on Wednesday. People began lining up well before the stores opened at 8 a.m. MT. 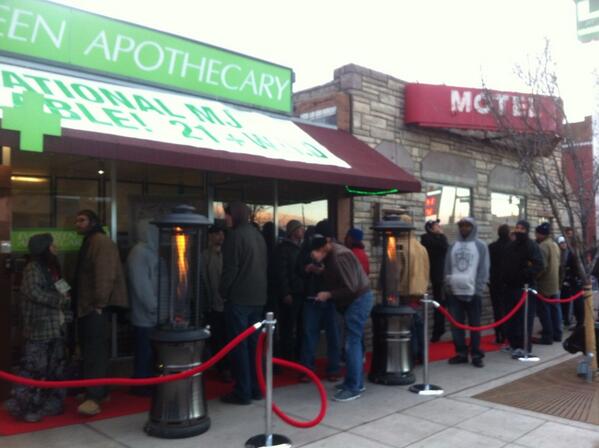 2. People braved the snow and cold to get a chance to legally purchase marijuana on New Years Day. 4. Teams in pharmacies and apothecaries prepared for recreational weed to go on sale. 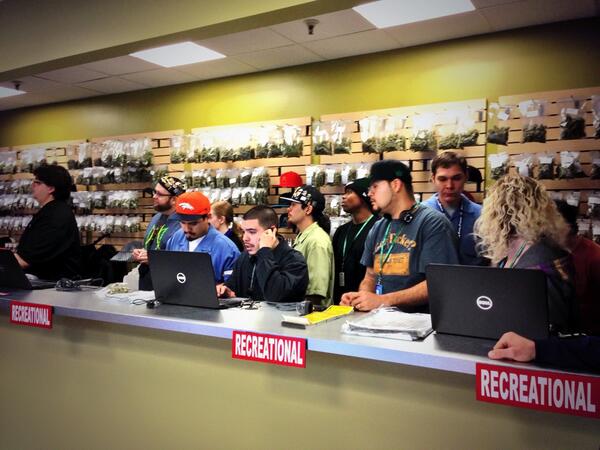 Medicine Man Denver staff preps for the start of recreational pot sales in Colorado. Watch @CNN for all the latest. 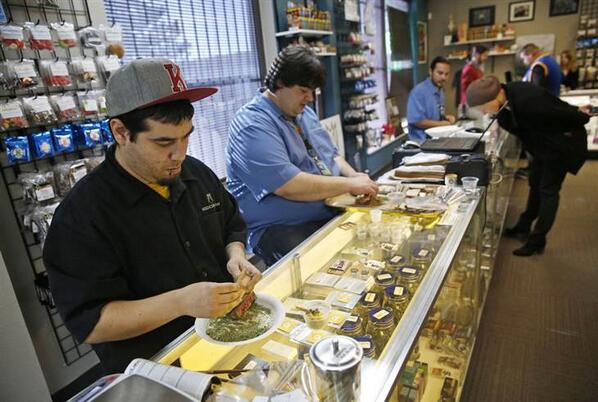 6. All the stores selling recreational weed in Denver. 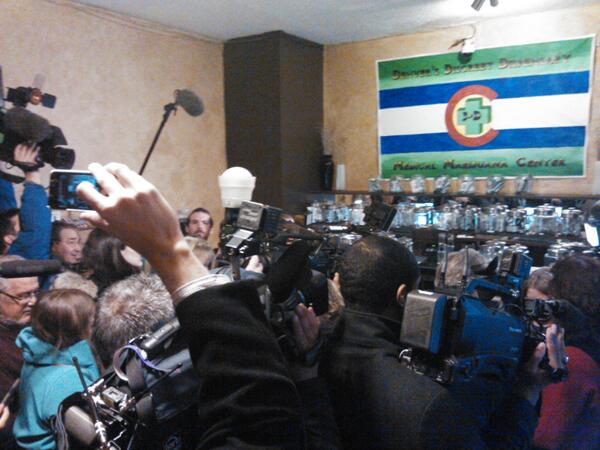 Minutes from the first recreational marijuana sale in Colorado.

A press conference at Denver’s Discreet Dispensary kicks off pot sales in Colorado.

Mason Tvert’s plea to the media trying to get a shot of the 1st sale: “I reall implore you to do this as calmly as possible.” #cannabisco

10. People came from around the country to buy weed — this father and son drove all the way from Georgia, and camped overnight in their car. 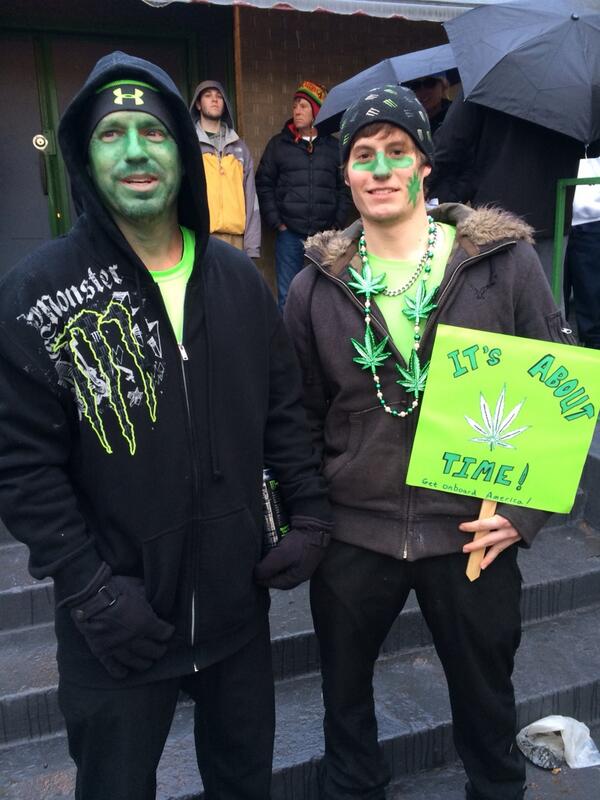 11. They told NBC reporter Noel Brennan that they planned to move to Colorado, partly because of the new laws legalizing recreational pot.

Nuke Colorado RT @Noeltbrennan: Just spoke to a father/son from GA. They’re moving to CO partly bc of its pot laws

12. One store, 3-D Cannabis, has a hallway for customers to observe their marijuana growing. 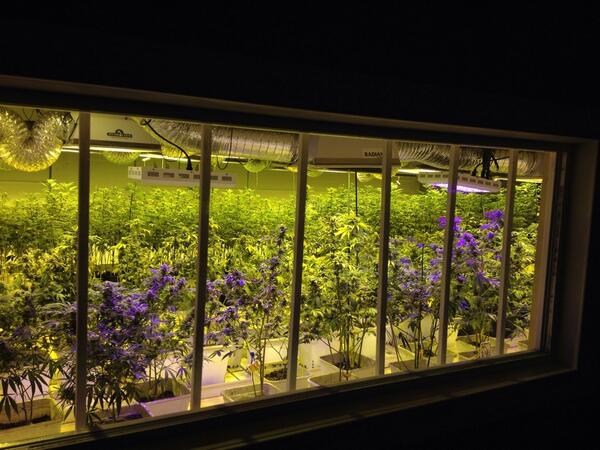 3-D Cannabis has a hallway where patrons can look into one of their grows. #cannabistco

13. The first person to legally purchase pot was an Iraq war veteran who suffers from PTSD. 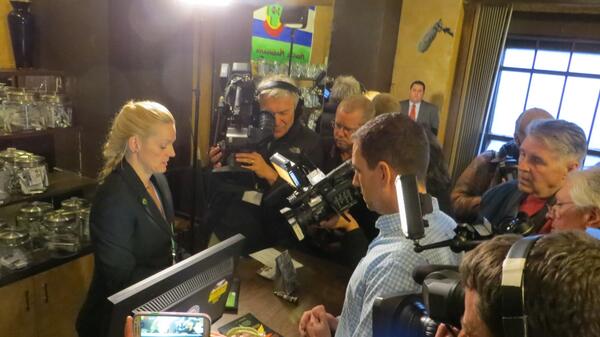 Just witnessed the first legal purchase of weed at 8am in Denver to a wat vet with PTSD named Sean Azzariti. 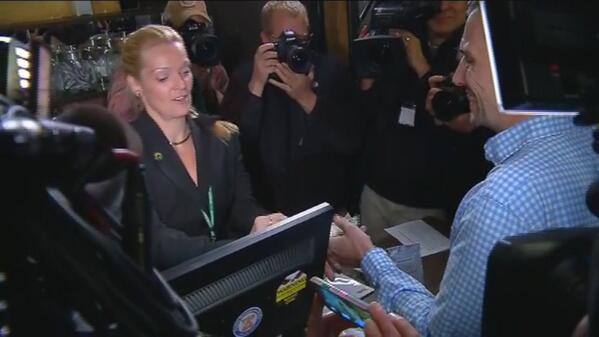 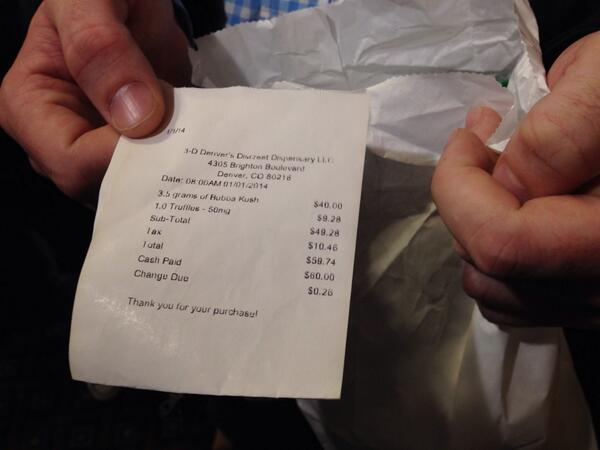 The receipt from Colorado’s 1st recreational marijuana purchase, in the hands of customer Sean Azzariti. #canabistco 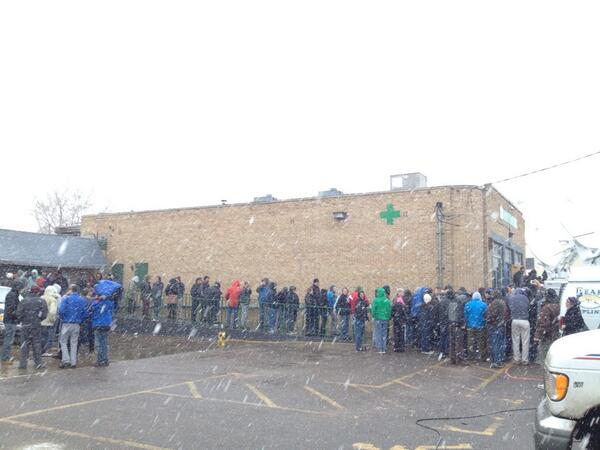 Quite a line has formed outside 3-D Cannabis. #cannabistco 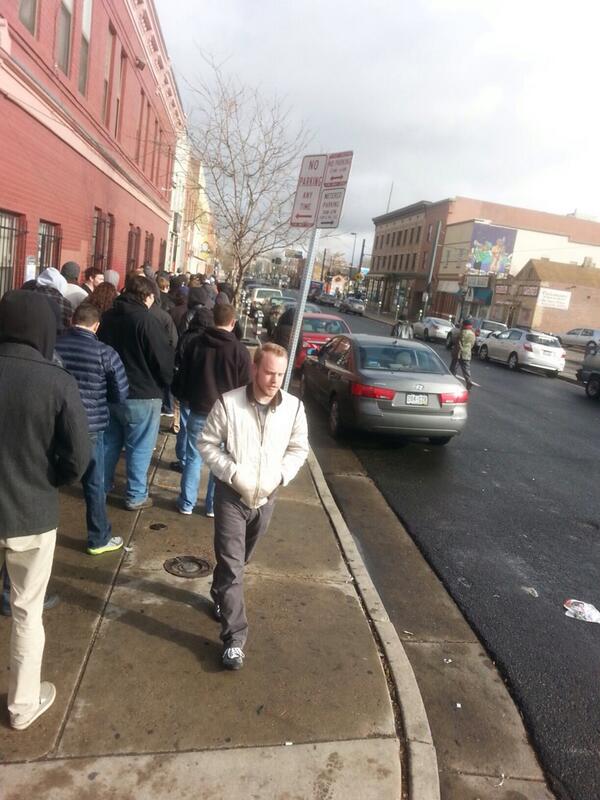 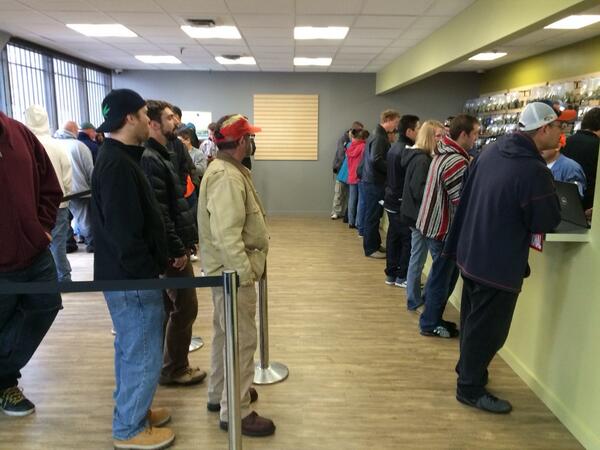 Lining up at the Medicine Man dispensary to buy legal 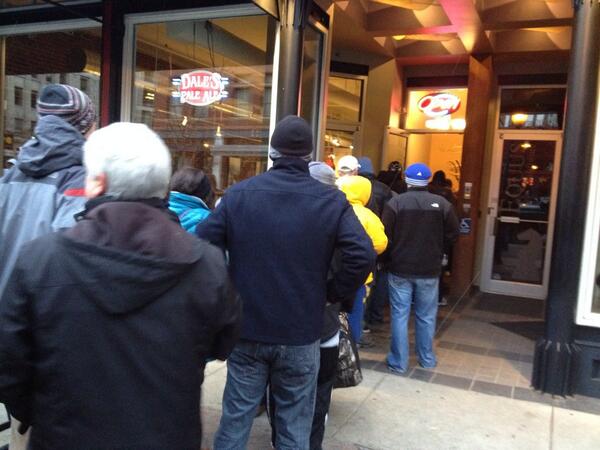 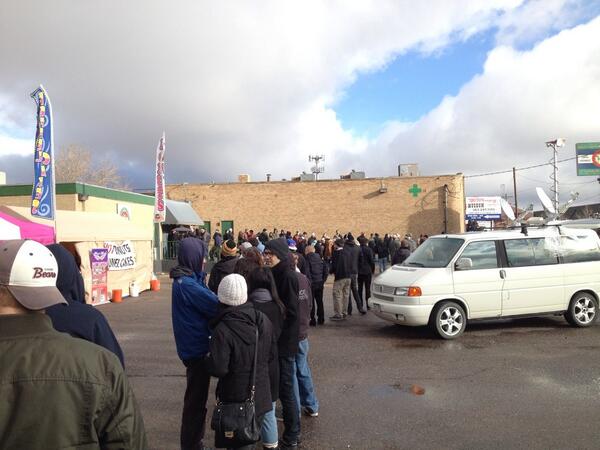 The line outside 3-D Cannabis is now huge. Hundreds. #cannabistco 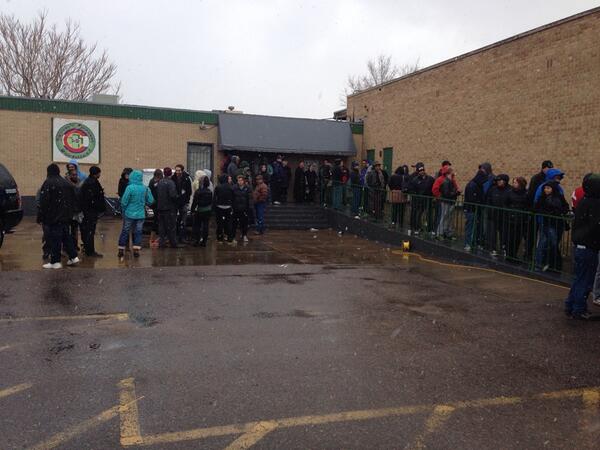 23. New “Know The Law” posters informed the public of the details of the marijuana laws — it is still illegal to consume pot in public, or drive while high. 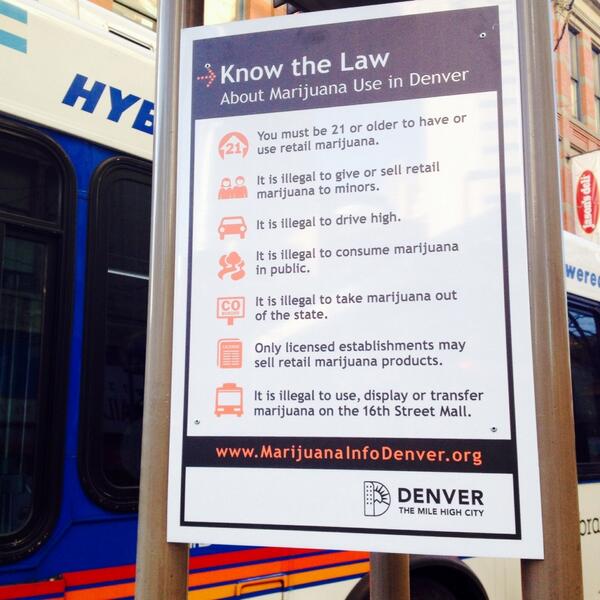 It wasn’t until the turn of the millennium that the NFL finally started to pay closer attention to its players’ safety and, most importantly, concussions.

For several decades (the league had its inaugural season in 1920), team doctors never understood the long-term effects of head injuries, and in most cases, players would continue to play, despite a loss of coordination.

While the league currently protects its players by implementing new rules and raising awareness, it’s an issue that will haunt the sport until the end of time. Why? Well, football is a contact sport.

Now, a shocking new study conducted by Frontline gives us even more chilling data. A whopping 96 percent of deceased NFL players who took part in a test tested positive for the brain disease known as CTE.

The findings represent a more than twofold increase in the number of cases of chronic traumatic encephalopathy, or CTE, that have been reported by the Department of Veterans Affairs’ brain repository in Bedford, Mass.

Out of the 79 players studied, 76 of them suffered from this debilitating condition, which causes memory loss, depression and in most cases, dementia. In some cases, this can result in suicide, just like we saw with former NFL great, Junior Seau.

In a separate study, Frontline examined the brain tissue of 128 football players from all different levels of play, including high school, college, semi-pro and professional. Out of these players, 101 tested positive for CTE.

According to neuropathologist Dr. Ann McKee,

The NFL is receiving multiple lawsuits from former players beginning to feel the early effects of this disease.

In fact, 400 former players claim they were fed painkillers to mask their injuries during their playing careers and they’re looking for compensation.

If former trainers and coaches did lie to them and actually allowed them to keep playing, despite the serious risk, then they deserve every penny.

After a year and a halftogether, Bella Hadid and The Weeknd broke up and made us wonder: is love real?

To make matters worse, the ex-couple will be at the Victorias Secret Fashion Show in Paris where the musician will perform while the model walks the runway.

I never had that awkward experience with an ex despite my being obviously Victorias Secret-model-worthy.

But dont worry about how Bella Hadid is handling the situation its obvious that shes reclaiming her identity as a single woman.

Hadid, who was known for wearing a golden necklace that read The Weeknds real first name Abel, has upgraded her jewelry to her own name.

Bella even once said that she made her relationship work by thinking of the Grammy-award winner as Abel. She said,

Im dating Abel. I dont see him as The Weeknd. Im proud of The Weeknd and the music he makes, but I really love Abel.

Thats right. Bella ditched the necklace she wore back in October, during possibly happier times for the couple, to don a chain featuring Bella.

She even rocked a black choker with her name on it.

But her new delicate, dangling gold necklace may be her fave since the spilt. Shes been seen wearing it three times out in public.

The first time hawk-eyed fans saw the charms, Bella Hadid was out with friend Kendall Jenner to a Lakers game.

November 8: Kendall and Bella Hadid at the Lakers game at the Staples Center in Los Angeles. #JennerUpdates pic.twitter.com/1R7kwiZMso

Breakups are super hard, but were happy that Bella Hadid seems to be handling this well. Plus, she always has her friends and sisterGigi Hadidaround for support.

And certainly, nothing says Imma do me more than rocking your own name around your neck. LEST YOU ALL FORGET WHO SHE IS.

Now, we just have to wait and see how the two will act at the upcoming Victorias Secret Fashion Show on December 5.

Subscribe to Elite Daily’s official newsletter, The Edge, for more stories you don’t want to miss.