Meet Elena of Avalor. She’s the newest Disney princess, but that’s not what makes her special. She’s also making history as their first-ever Latina princess, and audiences couldn’t be happier.

It’s been almost 80 years since Walt Disney released his first full-length animated film, “Snow White and the Seven Dwarfs,” in 1937, but not a single princess of Latin descent has taken center stage until now.

Latinos are the largest ethnic minority in the U.S. with 55 million people, and that number is growing. Elena is already making a difference by highlighting just some of the things Latino culture has to offer. 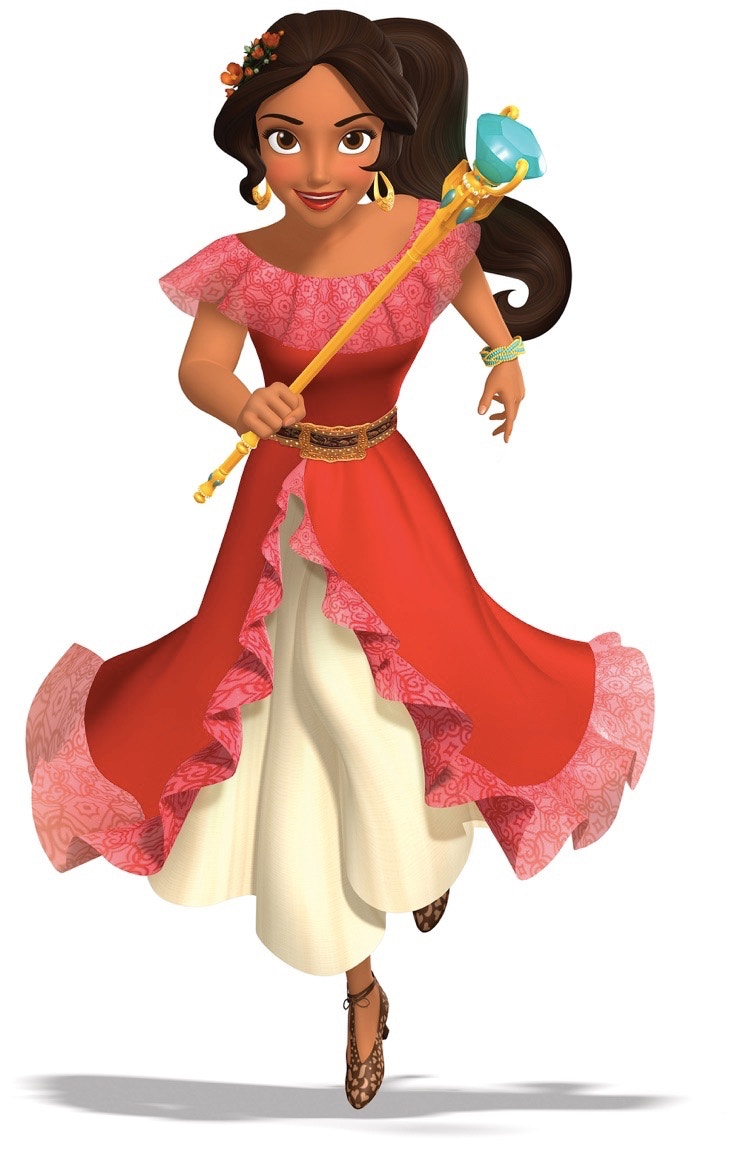 Elena is no damsel in distress or the type to sit around waiting for Prince Charming, either. In fact, her storyline does not include a love interest.

The story follows 16-year-old Elena, who’s been trapped in an amulet but has returned to rule her kingdom of Avalor and restore it to greatness. Because she’s still so young, she needs advice from the Grand Council: grandfather Tito, grandmother Cici, and adviser Duke Esteban. 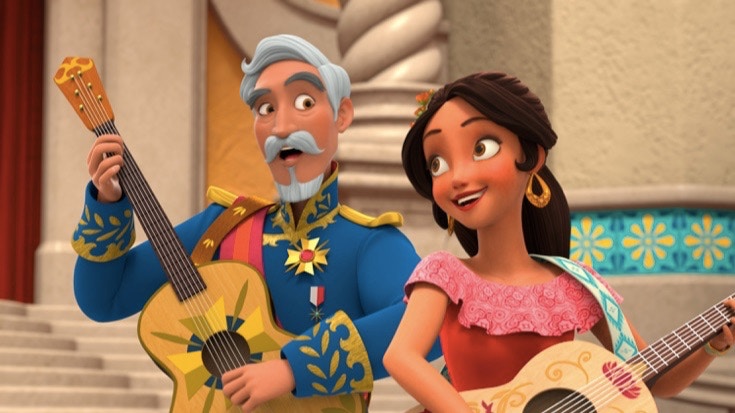 We’re so used to seeing princesses like Aurora lying lifeless on a bed waiting for her prince to bring her back to life with a kiss. Or Cinderella being whisked away to the ball with a beautiful gown on loan to impress the man who will ultimately save her from a life of servitude.

Don’t get me wrong. We all love a good Disney movie, and their past films are truly classics there’s no denying that. But it’s a new era.

Aimee Carrero, who voices the character of Elena, told ABC News, “I think that as women, whatever ethnicity, we want a balance of everything. But I think this message when it goes out to a young audience, its like, find yourself first, before trying to find a partner. Find your passion. Find out where your place in the world is.

Here are some tweets celebrating the arrival of Elena of Avalor in her new Disney TV series.

TY @DisneyChannel for #ElenaOfAvalor FINALLY giving our daughter a princess that looks like her, she is SO EXCITED! pic.twitter.com/aU5e9H8B96 Edgar Aguirre (@EdgarAguirre) July 23, 2016

I have watched this new Latina princess #ElenaOfAvalor from @DisneyChannelPR @Disney about 45 times. No lie, my kid loves it. Shawn Ewashko (@TheIllestShogun) July 26, 2016

Another voice actor in the series, Christian Lanz, also weighed in on the new and exciting angle of “Elena de Avalor”:

@AliciaEBarron As a Mexican-American immigrant & father, I

And he has a little fun with the character he voices:

Even the show’s creator and executive producer, Craig Gerber, is getting in on all the social media hype by tweeting out teasers for what’s to come.

And have I mentioned the music? It plays a huge role in the series, as well. Each episode introduces a new original song, and audiences are loving them.

For those who are digging the music, there

“Elena de Avalor” premiered on the Disney Channel on July 22, and 2.2 million viewers tuned it to watch.

It’s not just kids excited about this new animated series, either. Adults are digging it, too. They’re excited to see Latino culture celebrated, and Latino parents are overjoyed to see their children finally represented on such a massive platform like Disney. 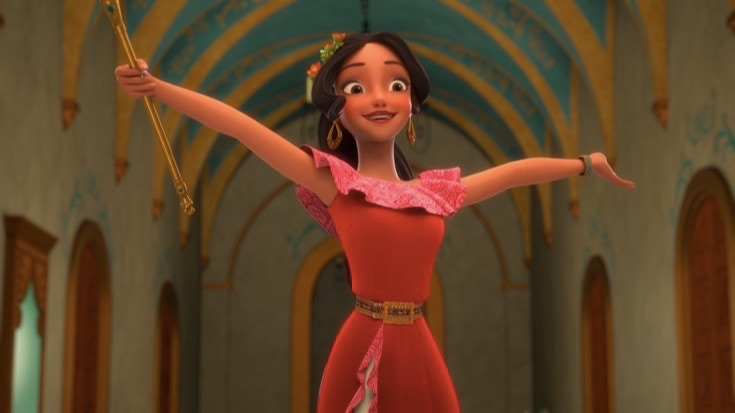 “It is important for children to see empowered, positive role models on television, and that’s why we wanted to introduce Elena,” show creator Gerber told Upworthy.

He said it’s been amazing to see how Elena and her adventures are inspiring young girls and boys of all backgrounds.

Gerber also created “Sofia the First,” who was initially thought to be the first Latina princess, but she wasn’t. The backlash from that confusion gave Gerber the idea to create Elena’s story because he saw the demand for a Latina princess.

It’s a cause for celebration that Disney finally took note that Latino children also want and need to see themselves represented in movies and television and did something about it.

Kudos to Disney for green-lighting this series and giving kids who didn’t see themselves represented in their movies and shows in the past like yours truly a reason to keep tuning in.

If you can imagine believing that your own strength is what keeps others alive, even at the expense of your own well-being, you might be close to imagining what it’s like to live inside the mind of a veteran.

But who gives strength to the heroes who support us should they need it? This catch-22 is exactly the conundrum so many veterans face.

It’s the number for the Veterans Crisis Line. It’s so important that places like this exist so very important that in 2012, President Obama doubled its staff.

The VCL is exactly what it sounds like. Some of its call responders are veterans, and many more are friends or family members of veterans who can understand what they’re going through.

These folks stay on the phone. They follow up. They try to ensure that the person calling is able to get help from local services.

People at the Department of Veterans Affairs are committed to preventing veteran suicide. Even one death by suicide is too many.

The VA is committed to preventing veteran suicide at large, in particular through programs like the Veterans Crisis Line.

Some veterans need even more help. That’s where the Veterans Crisis Line comes in.

It’s hard to reach these heroes. And it’s hard to give them the power to realize that there’s so much strength in putting yourself first and taking care of yourself.

“You know when you hit a baseball and you … get that crack? It’s like that when you’re able to hear a person smile. And make a difference.“

Each of us has the power to reach out to a veteran. If a veteran gets help, things can get better.

I’m sharing because I want every veteran to know about this. It might save that person’s life.

If you or anyone you know needs support, pick up the phone, dial 800-273-8255, and press 1 or visit the Veterans Crisis Line website to reach a caring, trained responder for a confidential online chat and to connect with other resources.

Everybody who works for a living deserves to make a living wage.

But the words of Derrell Odom, a Marine and veteran of two tours in Iraq, bring it home even more when he talks about life at minimum wage.

“I don’t want my son to look at me like I’m something less because I have to work for $7.25 and I bust my butt every day and I take pride in what I do we have a voice and we want it to be heard.”

Don’t we owe it to people like Derrell that good jobs with benefits and a decent paycheck are part of the deal when they come back home?

I’ll say it again: Good jobs with benefits and a decent paycheck should be part of the deal of living here.

On Veterans Day, rather than only posting well wishes to vets on Facebook, how about getting the word out that there are people like Derrell who came back from the bowels of hell to make $7.25 an hour?

It’s a national disgrace that needs to change.

I came across some interesting things when I started researching this, and I’d like to pass them along.

1. An estimated 1 million veterans would receive a raise if the minimum wage were increased to $10.10.

2. Some employers shy away from hiring veterans because they’re worried about PTSD.

3. In fact, some veterans even hide their experience in the service because they’re worried about their employer judging them, or their coworkers begin concerned about their mental health status.

What often results when people live like this? Depression, a worsening of already-existing PTSD, a downward spiral that can lead to homelessness and poverty, and more.

Approximately 57,000 veterans are homeless on any given night.

But even worse? Suicide, related to these issues and many others.

Studies have shown that suicide rates among veterans are 50% higher than among civilians. 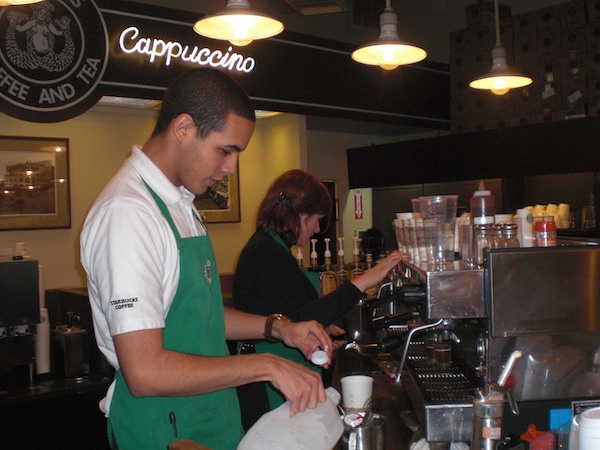 Some companies, like Starbucks, get it. It was just announced that Starbucks will be offering
free tuition to Arizona State University to a family member of the veterans who work for the company. It already offers tuition assistance to employees working toward an undergraduate degree at ASU, but this is icing on the cake for veterans who work there.

Meanwhile, here’s Derrell with one and a half minutes of YES.

That sound of desperation in his voice? It’s very real for veterans of all kinds, as well as anybody working at $7.25 an hour or close to it.

If you agree with him, pass this around. It might just open some eyes.